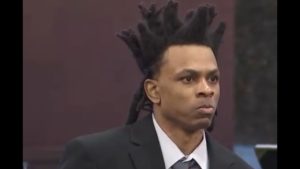 A Black man who has been charged with brutally killing his girlfriend and disabled daughter has decided to represent himself in the trial and has already made waves throughout the news cycle as he shouted his way through his opening statements at the start of the trial.

According to Complex, the man who is on trial, Ronnie Oneal III, has stated that the case against him is fabricated. He is acting as his own attorney and screamed out to the jury and courtroom witnesses that “by the time it’s all said and done, you will see who is the mass murderers.”

“This whole entire case has been tampered with and fabricated,” Oneal said. “My son did not witness me viciously beat his mom to death.”

It has been reported that Oneal had allegedly shot his girlfriend, 33-year-old Kenyatta Barron, and then supposedly beat her to death with the same weapon he fired after he ran out of ammunition. Oneal is also accused of allegedly using a hatchet to kill his own disabled 9-year-old daughter, Ron’Niveya Oneal.

Ronnie Oneal III, acting as his own defense attorney, yelled at jurors in his opening statement today and told them the case against him has been fabricated.

Oneal, accused of killing his girlfriend and daughter, is facing the death penalty. https://t.co/GkFWHgQD2n pic.twitter.com/qg9vcyKURk

Oneal has also been accused of stabbing and burning his own son, who is now 11-year-old, Ronnie Jr. He survived the attack and testified against his father on Wednesday.

Via video conference, Ronnie Jr. testified against his father and recalled the events and how they unfolded that night of March 18, 2018, in Tampa, Florida. “My dad killed my mom,” he said via video conference. One sergeant said the boy’s injuries were so bad that “he appeared to have been disemboweled.”

Oneal questioned his son and asked him, “Did I hurt you the night of this incident,” his son responded, “Yes. You stabbed me.”

The defendants 11 year old son is recounting what he says happened the night his mom and daughter was killed. “I saw my dad holding a shotgun and my mom screaming.” @BN9