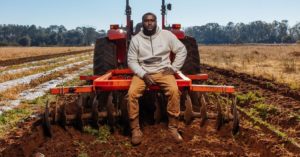 Miller, a conservative Republican, is suing as a private citizen and not on behalf of the state of Texas. The suit against the United States Department of Agriculture states the definition in the program fails to include “White ethnic groups that have unquestionably suffered” because of their ethnicity.

“Indeed, throughout American history, many White ethnic groups have been subject to “racial or ethnic prejudice because of their identity as members of a group without regard to their individual qualities,” including Irish, Italians, Germans, Jews, and Eastern Europeans. Members of these ethnic groups unambiguously qualify as members of a “socially disadvantaged group,” and as “socially disadvantaged farmers or ranchers,” the complaint states

Miller’s suit is being sponsored by America First Legal, a group founded by Former Trump administration advisor Stephen Miller. The group describes itself as one determined to fight back against lawless executive actions and the radical left.

In March, the Biden administration earmarked $10.4 billion for America’s farmers and ranchers. However, $5 billion went specifically to Black farmers who have endured decades of racial discrimination by the USDA.

Black farmers have dealt with less access to credit and technical support, which made it harder for them to update equipment, purchase seed, operate their farms and buy more land. They’ve also had to deal with racial bias at almost every level of government that has pushed them off their land.

Black farmers made up 14% of the U.S. farming population in 1910, but today they make up just 1.4% of the population. Discriminatory practices within the government are to blame.

Sid Miller believes locking out White farmers that have never had trouble getting the assistance they’ve needed, including from the Trump Administration, is unfair and is asking the court to declare benefits to Black farmers unconstitutional.

The suit has been assigned to to U.S. District Judge Reed O’Connor, who was appointed by George W. Bush and has sided with Republicans in stripping protections from Obamacare and fighting against bills that expand protections for transgender Americans.